Mould is a type of fungus, so it can start as a small contained issue but can then spread quickly, and before you know it, you’ve gone from having mould in your shower, to having mould throughout your bathroom! Mould can sneak up on you, so we share our tips on spotting mould before it takes over your home!


Mould usually appears as black spots. It can sometimes look like dust and dirt but the easiest way to tell the difference, is mould won’t simply wipe away.

Where is mould commonly found?

Mould is commonly found in areas of your home that are often subject to damp conditions like your bathroom, laundry, or places that don’t have ventilation or access to natural light, like your walk-in-wardrobe. Mould can start out in hard to notice places, like under your shampoo bottle or behind your washing machine. If you notice mould you should treat it straight away and do your best to determine the cause so you can prevent the mould from reappearing. For example: With mould growing under shampoo bottles, it’s a good idea to put your toiletries in shower racks, rather than leaving them on the floor to sit in any left-over water from your shower.

Mould on a larger scale

When it comes to mould on a larger scale, simple house hold products won’t cut it. That’s where our mould removal services come in. The mould in the picture above is caused by water damage, and while it looks irreversible our many years of providing mould removal services have given us the knowhow on how to remove mould from your walls and carpet safely and efficiently.

If you have mould in your home or office, you should deal with it straight away, so it doesn’t spread further or start to affect your health! No matter how big or small your mould problem is, our experienced mould removal specialists can help! Call now! 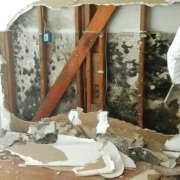 What Water Damage Will Do To Your Home

Did you know over time mopping can dull your tiles? Our Brisbane tile cleaning services can help!

How To Keep Your Leather Couch Clean

Pressure cleaning – It’s not as dangerous or damaging as the name suggests!

Your antique furniture could be worth more than you realise! Breathe new life...
Scroll to top

Get a quote today!